Skywave Linux 4 certainly looks different from all of the earlier versions, and the window manager (i3wm) also functions differently. It is less of a Windows-like "point and click" system and more of a "hotkeys and motions" based system. You can slice through tasks very quickly indeed, once your hands have a bit of muscle memory of Skywave Linux version 4.

When the boot process completes, you will see a basic desktop: wallpaper and a status bar along the top edge of the screen. To open up a start menu use the key combination [Super] + [R]. The super key is usually the "Windows" key. Rofi is the launcher which will show you a two column list of available applications, with the most frequently used at the top. You can open an app by scrolling to it and pressing [Enter] or by double clicking it. Also, you can enter the applications name on the top line and Rofi will filter out apps which don't correspond to the letters you enter. 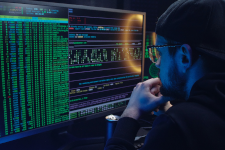 Need a VPN? Set up your own on a Linode VPS.

For example, Twitgrid appears in the menu; putting "twi" on the top line clears out all of the other items. Hit the [Enter] key and in a split second you have Twitgrid's first menu. When you know that, pulling up your favorite apps is easy and fast -friction free.

Several applications are available without the need for Rofi. These are opened with combinations of hotkeys. For example these are often used, and quickly become second nature in muscle memory:

Ten workspaces are available, numbered 0 through 9. To open a workspace and immediately go to it, use the hotkeys [Super] + [0 ... 9]. For example, [Super] + [2] opens Workspace 2 and moves you to it. You can open applications in that workspace and they will remain there. I often have anywhere from two to four applications running in a workspace. When things get too crowded I go to another workspace to open any more applications.

To move a window from one workspace to another, you must make it the active window first. Click it or navigate to it with the keyboard. Try opening a few windows and navigating through them with [Super] + [H] or [Super] + [L]. Have you noticed? Vim keys H J K L are frequently used for moving about, as are the arrow keys. Okay back on topic: the active window is moved to another workspace with the hotkey combination [Shift ] + [Super] + [0 ... 9]. Try [Shift] + [Super] + [4] to move a window to Workspace 4. It moves, but you do not move with it! You are essentially decluttering your present workspace by moving windows out to other workspaces. Move yourself to another workspace with [Super] plus the apropriate number key.

What about closing windows when you are finished with an application? Use [Ctrl] + [Q] on the active window and the window will close. Your terminal emulator is different, though. It runs in a terminal multiplexer, and [Ctrl] + [Q] closes only the window. The terminal session behind that window continues to run. So, kill your terminals with the "exit" command. The Vim-like ":q" also closes a terminal session.

There are times when you want a window open and an app working in it, but do not want it to clutter your screen. Use the scratchpad, the invisible workspace where you can put windows out of sight. To do it, use [Super] + [Shift] + [F1]. It is similar to moving an application to another workspace, but instead of assigning a number, the assignment is [F1].

The windows are automatically arranged in two columns, similar to the well known "master and stack" arrangement. There is one large "master" window. If there is only one window in the workspace, it occupies the whole area. If more windows are opened, the first one is resized to take half of the area and the second one occupies the other half. Subsequent new windows open in a vertical stack, dividing the column equally. Thus, the master window keeps its half of the area as one column, but the other column contains all of the windows opened later.

Any of the small windows in the stack may be "promoted" to master by first making it active, then using the hotkey combination [Super] + [P]. The application in the master window will then swap places with the application in the stack. If you use [Super] + [P] when the master window is active, it will be demoted, swapping places with the top window in the stack. Suppose there are only two windows open in a workspace? They will share the workspace area in a 50/50 two column arrangement. Using [Super] + [P] will cause the windows to trade places, flipping between the left and right columns.

Windows may be pulled up and out of the tiled layout and set to floating mode. To float any window, first make it active by either clicking in it or navigating to it with keys. Then, use the hotkeys [Super] + [Shift] + [Space] to toggle floating mode. To push the window back down into the tiles, use [Super] + [Shift] + [Space] again. It is the same key combination: you are toggling the floating mode on and off for the active window. Foating windows are automatically centered and scaled to a moderate size on the screen.

Use caution, because the floating window is not required to stay active. Open a new window or click on an existing tiled window, and that one becomes active, even with any number floating windows above it.

Floating windows are easily moved with the mouse. Hold the [Super] key and left click on the window, then drag it to a new position on the screen.

To resize a window with the keys, enter resize mode with [Super] + [Z]. Then, use the Vim keys [H] and [L] to manage the width or [J] and [K] to manage the height of a foating window. Width is tricky, as [H] and [L] seem more intuitive for floating windows, but odd for tiled windows. Just remember: [H] decreases width while [L] increases width of the active window. To get out of resize mode, use the [Esc] key.

Shutting Down or Rebooting

To shut down or reboot your machine, you have some options. The most user friendly way is to use the hotkey combination [Super] + [Shift] + [E], which brings up a red dialogue on the status bar. Hit a key [L] to log out, [S] to shut down, or [R] to reboot. Other key combinations bring up the same dialogue: [Ctrl] + [Alt] + [Delete] and [Super] + [Pause]. These are popular hotkeys from other systems which some users will know. To get out of this system mode, use the [Esc] key.

In the application launcher (Rofi), running System Shutdown will immediately begin the shutdown sequence. You can find it easily by entering "sy" in Rofi to filter out most of the other apps in the list.

Sometimes you may have problems with a troublesome application, or for another reason you want to clear out the whole session, leave, and be logged back in. Use [Ctrl] + [Alt] + [Backapace]. It will kill your user session and restart it, logging you back in to find an empty desktop ready to work. On a deeper level, the system never stopped: networking continues, root processes continue.

These are a few of many ways to interact with your computer through i3 and the hotkeys which have been set up for this system. They probably are not perfect for everyone, but they work well in most cases. To go further consider setting up your own persistent Linux system and tweak the hotkeys and i3 config for your own usage case.